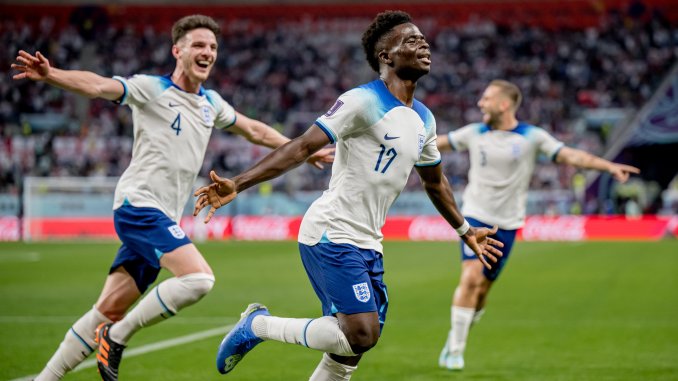 Having dominated the first-half amidst medical delays due to concussion for Iran’s Alireza Beiranvand following a collision, England took a 35th minute lead as Jude Bellingham headed in from Luke Shaw’s cross.

Bukayo Saka doubled England’s lead in the 43rd minute as he volleyed in from a knockdown header by Harry Maguire.

Raheem Sterling then added a third goal for the Three Lions in the first minute of first-half injury-time, as he volleyed in from Harry Kane’s header to give the fourth-placed team of 2018 FIFA World Cup a comfortable half-time lead.

Sterling and Saka then combined in the 62nd minute as the latter produced his second goal of the game, before substitutes – Marcus Rashford and Jack Grealish completed a 6-2 victory with late goals despite Iran’s Mehdi Taremi netting consolatory second-half goals.

England now sit top of Group B with Iran rock-bottom whilst USA and Wales occupy second and third respectively, following a 1-1 draw between the latter two nations as Timothy Weah’s goal was cancelled out by Gareth Bale’s 82nd minute penalty.

Across in Group A, late goals from Cody Gakpo and Davy Klaassen saw Netherlands defeat Senegal 2-0 to go second in their group behind Ecuador, who had beaten Qatar in the tournament opener yesterday (20 November).

From the first whistle, England looked in control with improved energy in contrast to their lethagric UEFA Nations League performance this summer, which quickly resulted in a second-minute corner from which Maguire was fouled by Rouzbeh Cheshmi.

Referee, Raphael Claus though refused to award a penalty which was backed up by a Video-Assistant Referee review.

Iran goalkeeper, Beiranvand – who impressed at 2018 tournament in Russia – though suffered concussion five minutes later in a collision with Majid Hosseini after flicking Harry Kane’s cross away from goal, which caused a nine-minute delay whilst he received treatment.

Beiranvand bravely attempted to play on but less than 60 seconds after the restart, he was down again and had to be replaced by Hossein Hoisseini.

Hoisseini quickly found himself in action with his most important save of the first-half, as he saved Saka’s 27th minute curled shot towards the bottom-left corner, whilst Saka then found the side-netting three minutes later following a quick pass from Mason Mount.

England’s intense pressure eventually paid off as Raheem Sterling found Luke Shaw in the 35th minute, from which the Manchester United fullback whipped in a high cross for Jude Bellingham to head in to score his first international goal for England.

Eight minutes later, Saka volleyed in from Maguire’s knockdown header to double the Three Lions’ lead in what is his fifth goal for England, yet his first at a major international tournament.

Sterling added England’s third goal in the first of 14 additional minutes of injury-time, as the Chelsea forward volleyed in from Kane’s cross on the right-flank.

After the break, England came out with the same intensity as displayed throughout the opening 45 minutes and won a early free-kick just three minutes into the half, as Kieran Trippier was fouled by Morteza Pouraliganji but the free-kick was comfortably cleared.

Sterling then triggered and finished a fast-paced 56th minute counter-attack with one-two pass with Kane but his shot was blocked.

Sterliing six minutes later turned provider as he played a direct pass to Saka inside the box, and the 21 year-old was able to calmly slide across into space to fire in England’s fourth goal to ease any lingering pressure on Gareth Southgate.

At the other end, Jordan Pickford was caught napping as a quick attacking pass from Ali Gholizadeh on the left found Taremi to rifle in beyond Pickford’s reach to reduce Iran’s deficit to three goals.

Iran though tried to respond but were ultimately undone again in the 89th minute as Bellingham played Callum Wilson through on goal, with the striker teeing up his fellow substitute, Jack Grealish to fire in to cap a confident opening win.

Eric Dier though conceded a sloppy foul deep into injury time as he tugged Pouraliganji during a free-kick, which VAR ruled was a penalty and Taremi slotted the spot-kick into bottom-right corner just before the final whistle.