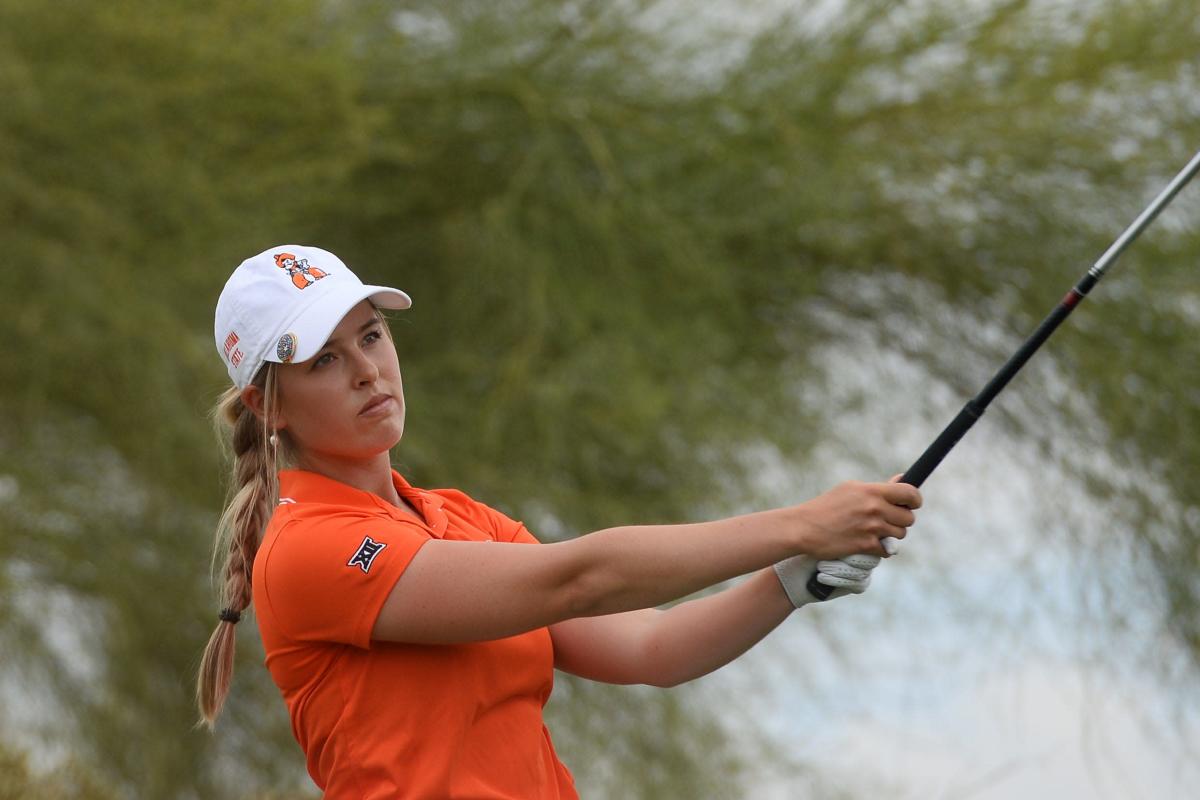 Oklahoma State fell a spot to fourth place on Tuesday at the NCAA Women’s Golf Regional at Karsten Creek in Stillwater.

The Cowgirls shot 298 as a team and sit with an 18-over-par 594 after 36 holes. Baylor maintained first place and actually pulled away from the field. The Bears are 1-over 577 after two days and are 13 strokes ahead of second place Arizona State.

Clemson (593), OSU and Michigan State (595) round out the top five teams. The top four teams advance to the NCAA Championships, scheduled May 20-25 at Grayhawk Golf Club in Scottsdale, Arizona.

Baylor’s Gurleen Kaur is first in the medalist race with a 2-under 142. She shot a 75 on the first day, then turned in a stellar 68 on Tuesday. She started Tuesday’s round in a 15th-place tie.

Kaur is one shot ahead of teammates Rosie Belsham and Britta Snyder, who led after Day 1. Also tied for second place is Oklahoma State’s Maddison Hinson-Tolchard. She is the only OSU player in the top 10.

The final round is set for Wednesday.

Oklahoma remained in the ninth place Tuesday after two rounds at the NCAA Women’s Golf Regional at the UNM Championship Course in Albuquerque, New Mexico.

With only the top four teams advancing to the NCAA Championships on May 20-25 in Scottsdale, Arizona, the Sooners will miss the cut barring a remarkable comeback on Wednesday. OU has a 26-over-par 602, which is 19 shots behind fourth-place TCU.

Oregon continued to lead the 12-team regional, shooting 284 for a second consecutive day. The Ducks are eight strokes ahead of Georgia and nine in front of third-place Texas.

Briana Chacon leads the medalist race with a 10-under 134. She is three shots ahead of Georgia’s Jenny Bae. Oklahoma’s top player, Hannah Screen, is tied for 12th place, 11 shots behind Chacon.

Some college athletes could make $50,000

Football and men’s basketball players on scholarship in one of the major conferences can expect to soon earn a minimum of $50,000 each year he plays because of the influx of cash from so-called booster collectives brokering name, image and likeness deals.

That prediction, based on market trends, was made this week by Blake Lawrence, co-founder and CEO of a company that helps athletes and schools navigate the ever-changing NIL landscape.

The increasing dollar amounts available to college athletes through the recent formation of collectives has drawn the attention of the NCAA, which this week released guidance for schools in the hopes of maintaining the original intent of NIL compensation.

College sports leaders are concerned some collectives have gone beyond paying athletes for activities such as endorsements and appearances and breaking the pay-for-play ban by offering cash to influence athletes’ decisions on where to go to school. NCAA rules prohibit boosters from making contact with prospective recruits.

Suns’ Williams is NBA Coach of the Year

Former Oklahoma City Thunder assistant Monty Williams has won NBA Coach of the Year after leading the Phoenix Suns to a franchise-record 64 wins during the regular season.

The Suns were the NBA’s best team by far during the regular season, finishing with eight more wins than any other team. The runner-up to New York’s Tom Thibodeau last season, Williams was the runaway winner this time. He received 81 of 100 first-place votes from a global panel of 100 sportswriters and broadcasters, finishing with 458 points.

WARRIORS 101, GRIZZLIES 98: Stephen Curry converted eight free throws over the final 45.7 seconds on the way to 32 points, leading the Golden State Warriors’ fourth-quarter comeback for a victory against the Memphis Grizzlies and a 3-1 lead in the Western Conference semifinals. Golden State rallied to win without coach Steve Kerr after he tested positive for COVID-19 less than two hours before tipoff.

CELTICS 116, BUCKS 108: Al Horford and Jayson Tatum scored 30 points each and led the Boston Celtics’ fourth-quarter comeback in a victory over the Milwaukee Bucks that tied their Eastern Conference semifinal at two games apiece. Horford’s 30 points were a career playoff high for the 35-year-old veteran who spent time last season with the Thunder.

GRIZZLIES: The Grizzlies say All-Star guard Ja Morant is doubtful for the remainder of the postseason after an MRI and further evaluation revealed a bone bruise in his injured right knee. The NBA’s most improved player had been averaging 38.3 points a game in the Grizzlies’ Western Conference semifinal matchup with Golden State. But he sat out the Game 4 loss with what the team said at the time was a sore knee.

KINGS: Sacramento officially announced the hiring of Mike Brown as its new head coach with hopes he can end the NBA’s longest playoff drought ever. Brown currently is an assistant with Golden State and will remain with the Warriors for the rest of their playoff run. Brown previously had two stints as head coach in Cleveland, where he guided the Cavaliers to the NBA Finals in 2007, and had one stint as coach of the Los Angeles Lakers.

OU gets commitment from Bamisile

Oklahoma men’s basketball secured a commitment from George Washington transfer Joe Bamisile. The 6-foot-4 guard averaged 16.3 points and five rebounds per game last season as a sophomore. He was on the Atlantic 10’s All-Conference third team.

It remains questionable when Bamisile can play for the Sooners. He’ll need an NCAA waiver to play this upcoming season because he’s a two-time transfer who moved from Virginia Tech to George Washington last offseason.

A 6-foot-3, 170-pounder, Asberry is coming off two seasons as one of the top players in the Sun Belt Conference. Last season, he started all 29 games while leading Texas State to the NIT, averaging 13.6 points while shooting 44.1% overall, including 38.4% from 3-point range.

Brady will be Fox analyst after playing career

Tampa Bay Buccaneers quarterback Tom Brady will join Fox Sports, the network announced Tuesday, as its lead NFL analyst when he retires, and will call games with the network’s No. 1 play-by-play commentator Kevin Burkhardt.

According to the New York Post, Brady’s broadcasting contract is for 10 years, paying him $375 million, shattering the record for compensation for an analyst. Tony Romo and Troy Aikman are reportedly receiving $18 million a year, from CBS and ESPN, respectively.

BOXING: Authorities will not file criminal charges against former heavyweight champ Mike Tyson after he was recorded on video punching a fellow first-class passenger aboard a plane at San Francisco International Airport last month. The victim and Tyson requested that charges not be filed. The video shows Tyson repeatedly striking the unidentified man in the head, drawing blood. The footage was first shared by TMZ, which said it was recorded on a Jet Blue plane bound for Florida. Tyson representatives have said the boxer was on a flight with what they called an aggressive passenger.

MLB: Major League Baseball dropped the one-game suspension of Chicago White Sox shortstop Tim Anderson for giving fans the middle finger during a game on April 20 as part of a settlement with the players’ association. He agreed to a fine as part of the settlement.

NHL: For 23 seasons, Patrick Marleau woke up each day preparing to play hockey and that helped him eventually break Gordie Howe’s record for most games played in the NHL. After a difficult year away from the game hoping another team would call and offer him a chance, Marleau announced his retirement Tuesday, ending a career that featured a record 1,779 games, 566 goals, two Olympic gold medals and nearly every significant San Jose Sharks record. 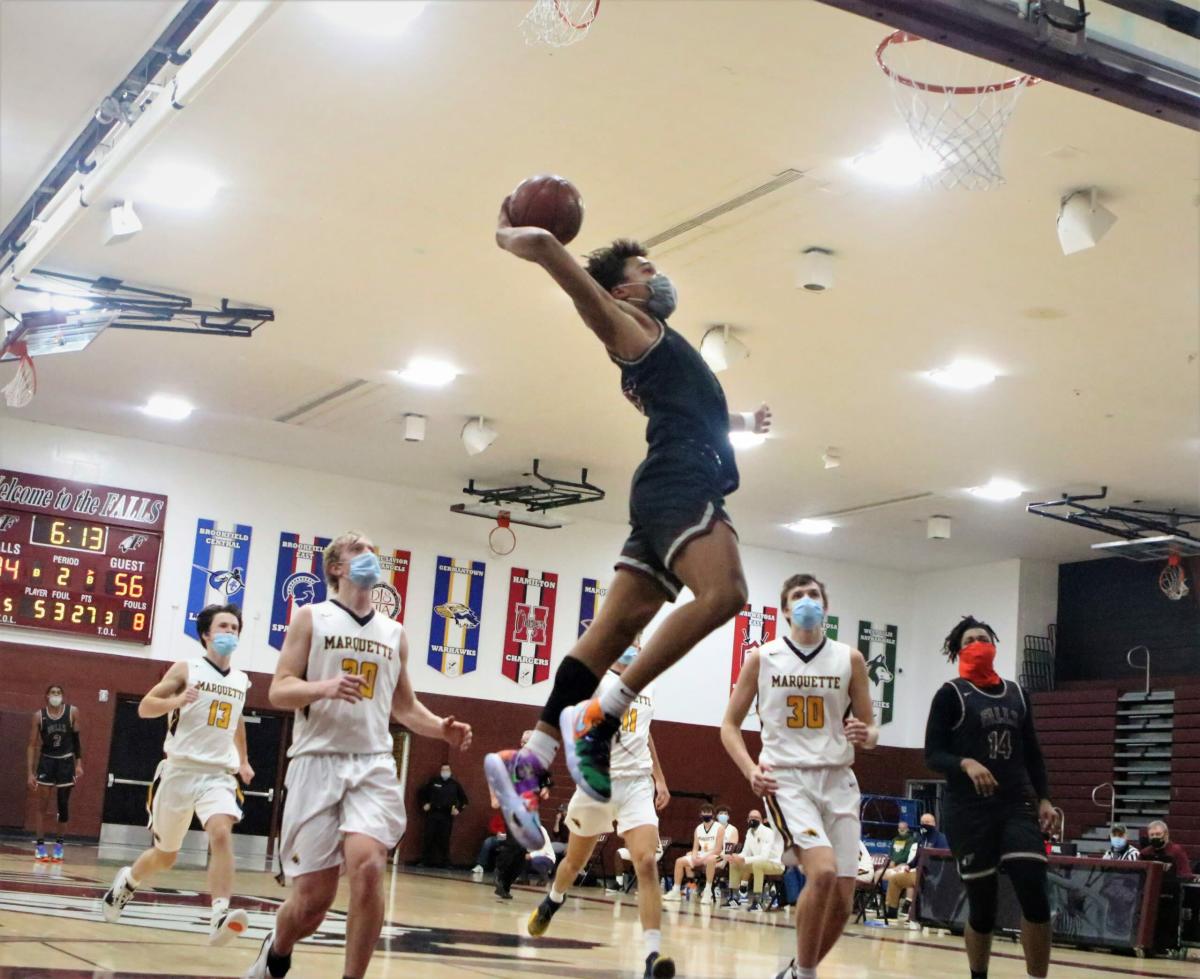